Getting Serious about Community Development (Part 17)

The purpose of this article is to obtain a precise definition of community. This is important because once we know what it is that makes a community tick, we will have a better understanding on how to develop communities.

In 1986 David McMillan and David Chavis wrote an article titled ‘Sense of Community: a Definition and Theory‘. In this article they have attempted to distill the characteristics of community based on an elaborate research into the domain of sociology. Their efforts resulted in a solid set of dimensions. We will take it as a starting point.

To begin with, the authors define Sense of Community as follows:

Their article then digs deeper into every element of the above definition.

Membership is the feeling of belonging to a group because one has invested a part of oneself in order to become a member. Let’s break this down:

The above elements work together in several ways in order for a feeling of membership to occur. For instance: a boundary creates the emotional safety for members to share their vulnerability. The amount of vulnerability that a person is prepared to share (i.e.:  a personal investment) with other members and the extent to which one is open to the emotional pain from the community determines the sense of belonging and identification. A common language, ritual or dress (symbol system) accelerates this process.

All of the above elements define specific areas of possible intervention. Important note: I say intervention, this first and foremost means ‘getting out the way’ by asking ourselves questions such as:

Members have to feel they can influence the community, and feel the community influences them. Influence is an intriguing dynamic, because it works simultaneously in two directions:

When we have a closer look we see that influence is created through the constant equilibration of status differences. It turns out that the most influential members are exactly those who are very skilled at the exchange of social currency.

Apparently influence is about walking the tight rope between ‘standing out’ and ‘fitting in’.

This component is about the presence of a reinforcement mechanism. The status and the competences of a member within a community need to be honored. Are members’ needs being met? Are those needs aligned with the needs of the community?

The researchers remain a bit vague about the components of that mechanism, claiming that social science is not exhaustive or unanimous in this regard. They do find that status and competence are essential in reinforcing the so-called person-environment fit.

It is exactly here that a relatively new branch of behavioral science can help us out: gamification theory.  While the majority of this field is concerned with the design of game mechanics, the underlying research is mostly looking into engagement dynamics and community dynamics. Gamification theory suggests that the achievement of status-differences among members is an essential reinforcement mechanism for communities to develop.

Next, the domain of gamification focusses on how to intentionally design goals, rules, feedback systems and voluntary participation to keep gamers engaged. It’s worth noting that motivation researchers find over and over that influence and shared emotional connection are the intrinsic motivators that matter most in reinforcing community engagement. 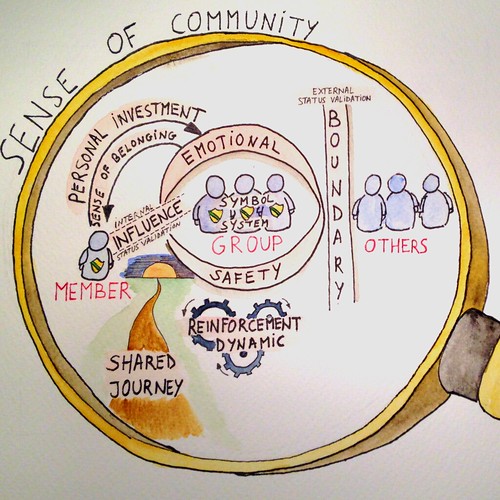 Shared emotional connection can also be referred to as ‘culture’ or as ‘sense-making’. It is about how members engage in the construction of the narrative about their community. It is a common and ongoing process of attaching meaning to events.

The authors indicate that a sense-making mechanism is essential for a community. Unfortunately they divert into a myriad of open-ended suggestions at this point. Nevertheless, in social science the building blocks of sense-making are well documented and explained in the work of Karl Weick.

According to Weick, there are 7 distinct characteristics of our perception that influence community. In an earlier article I have summarized them as follows:

1. The Past: We make sense of our experiences by comparing them with previous experiences. The organizational past is an important indicator in predicting the reaction to the current organizational change. The past is something that comes walking in through the back door of emotions. People remember events that have the same emotional tone as what they currently feel. Past events are reconstructed in the present as explanations, not because they look the same but because they feel the same.

2. My Relations: We make sense of changes in organizations while in conversation with others, while reading communications from others, and while exchanging ideas with others.

3. My Labels: People are sense-making creatures. Whenever a change happens that affects us we give it a label and put it into a known category (dangerous, stupid, beautiful, etc.). Almost instinctively, we respond with familiar questions: Who is behind this? What are the credentials of those people? Who said so? What will become of us after that change? Do they have the support of management?

4. A Declaration: Words have consequences. We should never underestimate the power of words and conversations. A situation is “talked” into existence, and the basis is laid for action to deal with it. Declarations are the way we translate stuff from below the surface into explicit knowledge. As a simple example, when people constantly say that “this project stinks” they create a climate in which the observation of difficulties is stimulated and the observation of possibilities is constrained.

5. The Real Story: People are interested in the truth, not the details. And people are not stupid. We construct the meanings of things based on reasonable explanations of what might be happening rather than through scientific discovery of “the real story.” Here is a warning flag to heed at this point: What is a simple truth for one group, such as managers, often proves implausible for another group, such as employees.

6. The Timeslot: Sense making is linked to timing. Like an airplane waiting for takeoff, an event will only get a limited slot for takeoff in the attention span of an individual. If that moment of attention happens to be the right one, it helps in setting a culture.

7. The Triggers: Nobody is capable of observing it all. Our observation is based on extracted cues. The cues that we observe depend on what we expect to observe, As a kind of self-fulfilling prophecy, we shape our reality according to how we expect it to be. When we think we are going to succeed at something, we will be triggered by every cue that confirms this reality and act upon it, and vice versa.

Suffice it to say that sense-making is an eternal loop and that it is an integral part of community.

What is the Point?

Why are we going such a great length in decomposing the elements of community?

First of all, we need to understand that a community gives one influence over one’s environment that is not available to that person as an individual.

Second, our understanding of sense of community is essential for accessing the 3rd dimension (i.e.: the layers of community where ownership resides) we have discussed in the previous article. Understanding these dynamics will help us to craft strategies to go from being stuck in an entitlement debate towards a culture of contributing and caring. This is the key to:

In the next article we will zoom in on the Sense of Community Index; this is a survey that was developed by the same scholars along the dimensions we have been using here. This will give us a better understanding of what cues to listen and look for and how to respond. 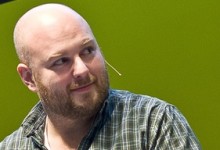