Getting Serious about Community Development (Part 15)

There is an alternative path to ownership, other than coercing people into change. It’s called invitation. Here is what we found when we dove into the subject with a group of sustainability managers.

A few weeks ago I had the opportunity to share my insights on social architecture with a group of managers who are responsible for sustainability in their organization or institution (profit, non-profit and government). The course was hosted by Harvard’s School of Public Health and assembled some of the finest thinkers and doers on the subject.

Each of them endeavors to make their organization accountable for sustainability. A noble cause, but not an easy one. Regardless of the position they are holding in their organization, their challenges seem to be comparable: creating ownership over something that is not on people’s priority list; i.e.: “important, but never urgent…” So they bump into the following behaviors:

Sounds familiar? It probably is when you are responsible for making your organization accountable for embracing an IT project, accurate timekeeping, business controlling, safety, quality or any other service in support of business operations you will empathize with the challenges of these managers.

These are all familiar struggles. Time and again we find ourselves fighting against the power of a hierarchical organization. We are up against positions, silo’s and experts who resist against any threat to their existence. To quote NYU professor Clay Shirky:

“Institutions will try to preserve the problem to which they are the solution.” 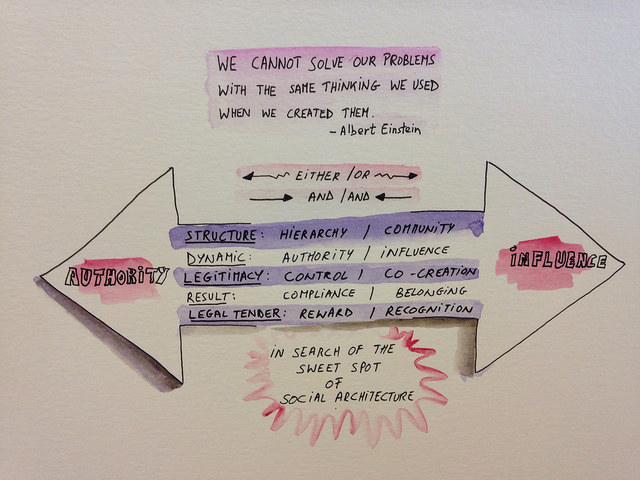 Here is what we can do instead: make use of the existing hierarchical structure as a starting point for communities; in the same way as a skeleton is a perfect structure to keep muscles, tissue and organs into place. This is what happens when we identify groups of persons within an organization who assemble around the same passion or interest. Their relationships are the tissue and the muscles that tie the skeleton together.

And just in the same way as a skeleton helps to keep muscles, tissue and organs into place; the tissue and muscles make sure that the skeleton can move. It makes sense to have both systems in place at the same time – all the time. The only way a rigid hierarchy can be sustained is with some sense of belonging, else it would get stuck. And the only way a community can sustain is by bringing in some hierarchical elements that represent boundaries and a sense of direction.

Where to Start: Invitation

So what does this mean for our ownership challenge? We already know that we don’t want to mandate ownership with a command & control dynamic of authority and measurable results because it only leads to more resistance. Instead, we want to launch the invitation to take part in a certain initiative.

This means people are invited to take up a role and be accountable for it. This also means that people can turn down the invitation, and this is precisely where the power of an invitation dynamic is situated. The fact that refusal is possible makes a participation valuable.

If people have joined the initiative by choice, the social contract has completely changed. This is one of the many powerful insights from the work of Peter Block.

What it Takes: Legitimacy

How do we make it safe for people to respond to an invitation? We need to have a certain legitimacy within the organization before this is possible. This is something that was consistently true for all sustainability managers in the room: the longer they had been with the organization and the more past accomplishments they had within the same organization, the more they were likely to get a response to their invitations (both: accepting AND rejecting the invitation).

Legitimacy is the street credibility that you build up as you pursue your career. It’s that by-product that – all of a sudden – seems to be a decisive factor for building a social architecture. It allows you to invite and enable ambassadors of the initiative to help.

How it Works: Psychological Safety

Eventually you will need to hold the space for the initiative, and this means shaping the conditions for psychological safety. There are two ways to do so:

What both of these elements have in common is that they bridge the status differences that are reinforced by the command & control system and that eventually stifle the organization.

What You Must Know: It Takes Two To Tango

Back to the sustainability managers and their ownership challenge. We asked them to asses their previous projects and initiatives and to pay specific attention to the moments of truth. A moment of truth is an event or a milestone that turns out to be a tipping point for the dynamic of the initiative (both: good and bad).

The below wordclouds were made by assembling the exact words that were used to describe the main triggers or keywords to describe the tipping point. Along with that they attributed these key-words to the command & control operating system (authority dynamic) or the community system (influence dynamic). The words that appear larger are the ones that appeared more frequently across all projects. 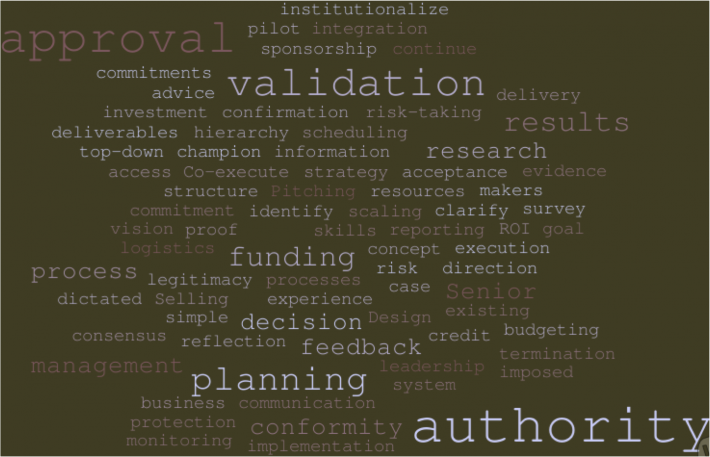 The skeleton… Command & Control Moments of Truth: These words describe which hierarchical elements triggered the moments of truth for fostering ownership over sustainability. 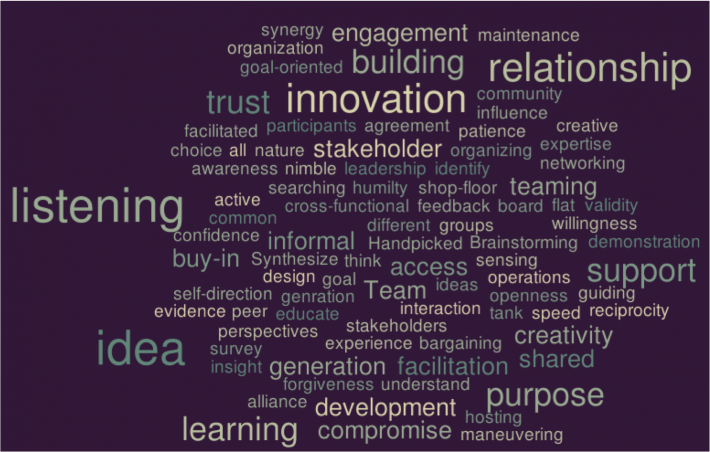 The tissue and the muscles… Community Moments of Truth: These words describe which community elements triggered the moments of truth for fostering ownership over sustainability.

When we have a closer look at the words that are printed bigger (higher frequency of occurrence) it is remarkable to see that those are the key words that bridge and glue the two operating systems together. This encourages me to think that we cannot depend on one single system in order to foster ownership.

You need both: mandate and invitation; hierarchy and community. This is not an ‘either/or’ game; rather it is an ‘and/and’ situation. Both systems need to be switched on at the same time and all of the time. We get in trouble when one of them drops.

The Shocking Part: It’s About You

The path to ownership is not an easy one, and if you are the one responsible for making it happen, rest assured that you are not alone. The below wordcloud was made by assembling the exact words to describe what it takes to raise their game to the next level by the same group of sustainability managers. 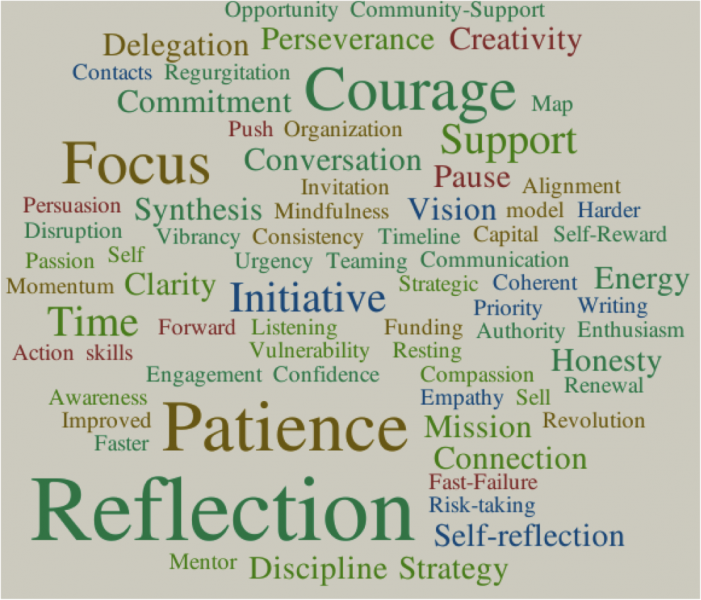 Note how almost all of the words refer to an intrinsic source of energy. It is almost shocking to see how very few words on this wordcloud are actually referring to conditions that are outside of our individual span of control… thereby making the challenge more personal and exciting.