The Real Story of the Burning Platform

“It was fry or jump, so I jumped.” —Andy Machon

The Real Story of the Burning Platform

One night in 1988, I was watching a TV news program when the newscaster began interviewing a survivor of a massive oil rig explosion (see sidebar).

For months, I had been looking for the right metaphor to describe a pattern of commitment I had uncovered and the story was exactly what I needed. It caught me off guard, however, because it appeared out of a story of disaster…the last place from which I thought a metaphor about commitment would have emerged.

Let me back up a little. My work has always been informed by the field research we conduct at Conner Partners, which goes back to the firm’s beginnings in 1974. From the start, we’ve focused on uncovering the mindset and behavior patterns associated with succeeding or failing at large-scale organizational change.

Several months before I saw the newscast, we found a very distinct success pattern related to the nature and level of commitment that senior leaders demonstrate during major successful initiatives. What was revealed in that pattern is common knowledge today, but this was in the pioneering days of early change management and we were still groping in the dark for even basic answers.

What I saw back then was that the staunch commitment successful leaders showed toward their initiatives wasn’t due exclusively to their attraction to a new desired state. They also displayed a sense of distress related to their current state. What was becoming clear was that the high cost of maintaining the status quo played an important role in sustaining the motivation needed to truly realize change objectives. 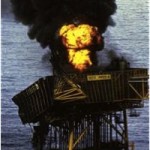 At nine-thirty on a July evening in 1988, a disastrous explosion and fire occurred on the Piper Alpha oil-drilling platform in the North Sea off the coast of Scotland. One hundred and sixty-six crew members and two rescuers lost their lives in what was (and still is) the worst catastrophe in the fifty-year history of North Sea oil exportation. One of the sixty-three crew members who survived was Andy Mochan, a superintendent on the rig.

From the hospital, he told of being awakened by the explosion and alarms. Badly injured, he escaped from his quarters to the platform edge. Beneath him, oil had surfaced and ignited. Twisted steel and other debris littered the surface of the water. Because of the water’s temperature, he knew that he could live a maximum of only twenty minutes if not rescued. Despite all that, Andy jumped fifteen stories from the platform to the water.

When asked why he took that potentially fatal leap, he did not hesitate. He said, “It was either jump or fry.” He chose possible death over certain death. Andy jumped because he felt he had no choice—the price of staying on the platform was too high.

While listening to the story, I began to hear elements of the survivor’s (Andy Machon) story that reminded me of what we heard when interviewing the leaders who had helped us uncover the commitment pattern. There were many parallels. Consistently, these executives said something like, “I had to make the changes work, no matter how difficult or frightening the process was.”

I was most struck with how often leaders talked openly about wishing they didn’t have to pursue the changes they were implementing so well. “With everything else we have going on around here, this initiative is not what I thought I would be busy doing. The execution process is uncertain and the risk of poor outcomes is high. We don’t have the time for this right now; we don’t have the resources and we don’t have the people. The problem is, if we don’t pull this change off well, the consequences will be too much to bear. I have to get it done and done right.”

Andy was also clear that he didn’t want to jump off that platform (leap into risky change). He was badly hurt from the explosion and the last thing he wanted to do was plunge 15 stories, with no guarantee of rescue, into a frigid sea full of flames and debris.

The interviewer asked how he found the nerve to make the jump. His response stunned me. I don’t remember his exact words, but it was something similar to: I knew that if I stayed on the platform, I was going to fry. Andy chose probable death over inevitable death.

That was a powerful moment for me. I recognized in Andy the same kind of determination to act that I heard from the leaders I had interviewed. In their own way, they were saying they were also frightened…scared of jumping into all the ambiguities and jeopardy that came with major change. Yet, the price for not doing so was simply too high. Like Andy, leaping into harm’s way was not something the leaders casually pursued. They moved toward their changes with seriousness and sobriety. They executed their initiatives for only one reason—they were essential to businesses growth, if not survival. This didn’t mean the initiatives would always succeed, but it did mean that the executives would do everything within their power to reach the desired outcome.

From that point on, I have used the burning-platform story in my writing, speeches, and executive seminars, as well as my consulting work, to convey the intensity of the leadership commitment needed to succeed with major change.

From Metaphor to Myth

Almost as soon as I began using Andy’s account as a metaphor, it became obvious that many people could relate to the story as a symbol for change commitment. The more I told the story, the more the metaphor’s appeal grew. In 1992, I included it in my first book, Managing At the Speed of Change

(affiliate link), and the story really started to spread…first within the U.S. and eventually worldwide.

With the metaphor’s growth in popularity, however, came the inevitable mutations from the original story line. Before long, I began hearing about people attempting to make the same points I was expressing but using stories about burning buildings or bridges. My personal favorite was when someone replaced “burning platform” with “burning bush.” (News flash—that story originated from a different source than me!)

I soon realized that releasing something into public space can become a double-edged sword. While I enjoyed seeing the story gain popularity, I also had to come to grips with its widespread misinterpretation. The Piper Alpha incident described in the sidebar is the condensed version of the story. It’s an accurate but incomplete explanation of what happened and, as such, it’s potentially misleading. Some important amplifications are not drawn out and without them, the story can be easily misconstrued. Unfortunately, it was variations of this abridged depiction of the burning platform account that many people heard when the story’s popularity began to grow.

When this started happening, I realized that I had lost the ability to maintain the integrity of the story’s original intent. Not only were details about the tragedy itself distorted, but some of the most important implications that made the story such a powerful change metaphor were lost or twisted into interpretations unrecognizable to me.

Don’t get me wrong—witnessing thousands of people worldwide pass the metaphor on to thousands more has been a wonderful experience. It has been particularly gratifying to hear from so many people over the years who told me how meaningful the story was for them. They not only got the main points I was trying to convey, but they also felt that it accurately explained their circumstances when introducing major change in their organizations. (Some described the deep, tenacious commitment that existed, which resulted in the successful execution of their initiatives; others recounted the lack of necessary resolve, which explained the failure of their change projects.)

All in all, I can say that, for the most part, the story worked as I had hoped. That’s the good news. The bad news is that it hasn’t worked in all cases. More people added their own revisions than I wish were the case and their modifications resulted in a message that, in some circumstances, was different from the one I intended; but in others, it was antithetical.

Here are two of the most prevalent misconceptions:

These characterizations have sometimes been attributed to the story and have even been described as representing my own personal view of how change should be architected. I assure you, neither is the case. Once I learned that these sorts of distortions were proliferating, I quickly set about to try to help people understand the actual intentions behind my use of the story. I first attempted to correct the misconceptions when I published my second book, Leading at the Edge of Chaos

(affiliate link). I included a section that retold the story and offered some clarification. I have also offered as much interpretation as I can in speeches and during my consulting work with clients.

Regardless of these efforts, however, some false impressions still persist. What is particularly fascinating is how the fallacies resurge periodically with renewed fervor. We appear to be in another of the resurrection cycles because I’ve been asked several times recently to explain my original purpose in using the story. So, here we are.

I can’t control what others do with the story, but my intention in this series will be to explain once again how I use the burning platform as a metaphor for the unwavering commitment needed to sustain significant change.

In the next post, I will discuss the four types of burning platforms.

The Four Kinds of Burning Platforms >>