It is not the first time I got carried away by music into insights and aha’s on leadership. Last week I was fortunate enough to sneak into another rehearsal of the B’Rock orchestra. A strange thought crossed my mind: ‘What Would Google Do?’

B’Rock is a project based ensemble that is organized in a particular way. 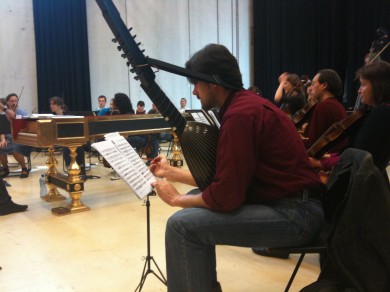 Like my previous visit to the B’Rock rehearsal, this was another immersion into music as a metaphor of leadership.  Like last time I was scouting learning methods in this exclusive and (until now) closed setting. A bizar experience … that’s why it is called BizzArts.

The way the B’Rock ensemble is organized is a great source of inspiration for anyone with a knack for management and leadership. B’Rock is a ‘democratic’ orchestra. And this has far reaching consequences on how each of B’Rock’s projects are organized.

If Google Were a Baroque Orchestra

With his 2009 bestseller What Would Google Do?

Jeff Jarvis described a turning point in our economy by explaining in great detail how the internet is totally changing the rules of the game in our economy. Jarvis describes the disruptions on all levels of management when ‘online-real-time’ and ‘access to information by default’ enter the stage. The factory model of the industrial revolution has brought us prosperity and wealth, but in this information economy the command-and-control management needs to make place for new dynamics.

Let’s not get hooked on what the internet and baroque music have in common (because the answer is plain and simple: ‘nothing’). The point is that this orchestra incorporates a leadership style beyond command-and-control.

Frank Agsteribbe – the leader of B’Rock – does not like to be addressed as the conductor. Rather, he sees himself as the ‘musical leader’. You may think this is just a small difference, but it shapes all of his decisions and actions as a leader.

‘Democratic’ does not mean ‘anarchy’, because there area few non-negotiables where the musical leader draws the line: choosing the program, setting the calendar and shaping the context. In an organization this is comparable to defining the strategy, defining the projects and communicating the vision. Frank makes it clear that this is the task of the leader and unlike sloppy organizations he takes full responsibility of these aspects.

Second: Be a Platform

Unlike other orchestras who see themselves as a destination (and attract mostly mediocre musicians who are in search for a safe place to hide) B’Rock functions as a beehive: musicians are attracted and form a project based team.

The form of the beehive stays the same (the playing field), but the project at hand determines the pattern that the bees will follow and the dance they will perform.

B’Rock is the platform for awesome musical projects such as ‘On the Road to Mozarts Harem‘ or ‘Adieu to the Pleasures‘, thereby attracting better than average musicians.

Google is a platform, and if it were an orchestra it would be a project-based beehive. How about your organization? What are you being a platform for?

Third: Get Out Of The Way

This is where we got to observe that the musical leader walks his talk. As he explained right before the rehearsal:

By allowing them to do so, I widen the scope of what I can hear and what I can see.

The problem with most orchestras is that of the dominant leader, the conductor who gets tempted to think that he is the centre of the orchestra (a moral that I mentioned in the previous post on music and leadership).

Dominant leaders miss out on a lot of opportunities to improve because most musicians with a simple or creative idea will not bother to stand up and suggest it to the conductor.

Right. They don’t want to get in trouble.

Although what looks like a chaotic organization at first, is actually an organic organization: in each section of the orchestra there is a spokesperson and often this role is a rotating role.

Actually, these are the lead players of each section who set the milestones and accents. In the beginning of each project they even have separate ‘leaders rehearsals‘. This is an interesting concept.

When did you have a leader rehearsal prior to kicking off another million dollar project?