Strange things happen when you look at leadership through the lens of music. Basic assumptions flip over and stay like that forever after. You untie knots that you took for granted. Like the idea that a leader is the most important person of a team.

When you lead a team – big or small – you feel responsible for the outcomes. Sure as hell you want those outcomes to be successful by all possible measures. Maybe you got elected into this position. Maybe you fought your way up or you started from scratch and built your own team step by step.

It doesn’t matter, because sooner or later you will be looking for tips and tricks to increase your performance as a leader. How To’s, Cookbooks, do’s and don’ts, MBA courses and leadership master classes.

Have a look at Google as you type the word ‘leadership‘ and the system returns the most popular searches that people have done before you. Turns out that you are not the only one eager to find out HOW to lead. 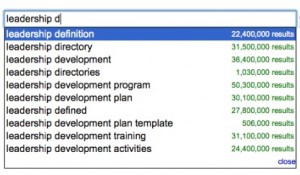 Unfortunately all these sources turn out to be a disappointment when I look at the return on knowledge I have gotten out of them:

Duh. Not really getting any closer to the secret of leadership.

Guess I’d better listen to some music or watch some TED video’s instead. And that’s what I did. (Note: If you don’t know the TED talks, this is a good time to dive in)

As a starter, have a look at the below talk of Itay Talgam on leadership of the great conductors and prepare for some flipping insights on leadership.

Talgam hits the nail on the head when he talks about the small gesture of the conductor. He continues:

And suddenly, out of the chaos, order. Noise becomes music. And this is fantastic. And it’s so tempting to think that it’s all about me.

This video definitely flipped my beliefs on the job of a leader and made it less tangible and controllable at the same time. Turns out that it’s all about enabling instead of controlling.

And if that is so, we desparately need an alternative to the long checklists and cookbooks on leadership. To begin I propose a two step remedy:

Step 1: There is nothing to fix and it’s OK to be happy. So leave Mr. Grumpy home.

Step 2: Your leadership is about enabling other people’s stories to be heard at the same time. So: be the space instead of the hero. Create the conditions instead of controlling the outcome.

And then you have other stories, unseen. People who build this wonderful concert hall. People who made those Stradivarius, Amati, all those beautiful instruments. And all those stories are being heard at the same time. This is the true experience of a live concert.

Once you replace controlling the outcome by creating the conditions you will be amazed by the power and the passion that you light up in people. The only thing you need to do is ask yourself the question: “who am I being that their eyes aren’t shining?” as the KPI (Key Performance Indicator) of your leadership.

So who are you being and what has to become of your job as a leader? You are the holder of a space that enables things that are fare greater than you. Trying to control the outcomes will only reduce the performance (and make you more tired).