The naivity of a beginner and the feedback of people around you are the best conditions for innovation to occur. As it turns out, innovation is more about allowing the innate creativity to come out than it is about being a genius.

A few months ago I was a co-guest-speaker for a foundation of voluntary workers who give support to adolescents in trouble (problematic family situations, psychiatric disorders, young mothers, etc.). The topic was innovation and how they could learn from best practices in both the non-profit and the profit sector. There were less than 15 participants – each of them managing a foundation in the ‘adolescent care sector’ – and there was good interaction and sharing of ideas.

Together with the other guest speaker – the director of a foundation that is considered an innovator in that segment – we concluded that innovation is a matter of human factors and mindsets, rather than technological acumen. To summarize, there were six levers to innovation we put on the forefront:

1. Pragmatism: this is the theme that Tom Peters would translate as ‘They say plan it, I say do it‘. In each innovation and renewal exercise there is a thinking phase and a doing phase. The geniality of innovation lies in the second phase. ‘Real innovation’ so to speak is ‘a reaction to the prototype’.

2. Naivety: some would say ‘ignorance is bliss‘. My co-speaker rephrased it as ‘if it’s a good project it will get funded‘. Naivety also means putting an unconditional trust in your peers and co-workers as you are implementing the innovation. If you open the oven every five minutes as you are baking the bread, I guarantee it wil be lost.

3. People: Marcus Buckingham would summarize this one as: ‘People don’t change that much. Don’t waste time trying to put in what was left out. Try to draw out what was left in. That is hard enough.‘ Innovation in that case is a process of ‘drawing out‘ rather than ‘putting in‘. Regular readers of this blog know that it’s all about involvement.

4. Approach: Adopt a structured approach of getting on the other side of your boundaries on a regular basis. My co-speaker found that simple ideas and contact moments with volunteers, parents, neighbors, etc. were very fruitful from a serendipity point of view. The quote that fits best here is: ‘Do one thing every day that scares you.’ from Eleanor Roosevelt.

6. Thresholds: When it comes to expanding boundaries and doing stuff we never did before, all organizational change practitioners know that the greatest source of bullshit with which we must contend is ourselves. Asking the question ‘What would I do if I was not afraid?’ -just like Hem and Haw in the famous tale of Who Moved My Cheese, you will discover that your relationship with fear determines your ability to innovate. It is our own maturity, expressed by how well we deal with our own fear, which will determine how well we ‘allow’ innovation.

My inconvenient truth and that of many others is that the true genius resides in interaction with people and co-incidence. Getting the added value out of those moments places a different emphasis on intelligence than we were used to.

Intelligence and innovation from that perspective is not ‘the ability to know and to accumulate and analyze facts‘ but rather ‘the ability to interact, the courage not to judge and the naivety to commit before knowing how’. Duh… never seen a management guru praising those skills… 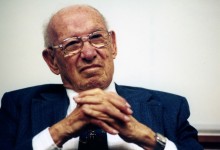