The ups and downs of parenting help me to inverse the illusion of my ambitions and the lie of quality time. They even help me to close my own knowing-doing gap.

Last week we had a blast when our second daughter finally started to ride her bicycle. She is a bit slower at those things than other children of her age (and of course faster and more mature at other things – no two children are alike). This was a milestone where we had almost given up our hope – which makes it even more interesting to draw a parallel with some of my projects. 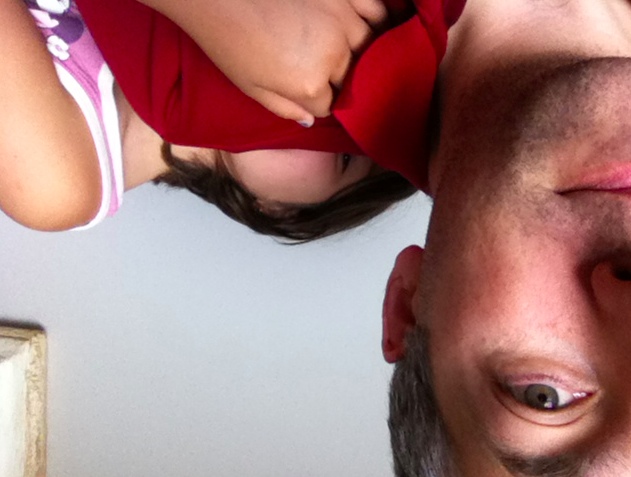 So what eventually did the trick? And what did I learn? In short: to go backwards and to turn it all upside down (hence the picture of the two of us – upside-down. Repeat: intentionally upside-down). I gave up on two things that turned out to be an illusion anyhow.

1. Give up my ambitions

Please read that again. This time with the emphasis on the right words: “Give up my ambitions”. I realized that as soon as I gave up on wanting her to be able to ride that bike, I stopped being so pushy. Instead I focussed on another goal: I want her to want it.

All of a sudden it became clear to me that – despite my career in change management, an impressive library on positive psychology, a book on organizational change and more than 280 blogposts – I was so obsessed by the result that I went blind on involving her.

So how would that translate to our everyday practice of projects? What if we stopped pushing for signs of progress and started looking for signs of desire? How would that alter our project approach? More important: how would that alter life after the project; when people are supposed to take care of themselves?  The answer: less focus on the deliverable and more focus on the desire. Come to think of it, this is exactly what Antoine de Saint-Exupéry meant when he said:

If you want to build a ship, don’t drum up people to collect wood and don’t assign them tasks and work, but rather teach them to long for the endless immensity of the sea.

2. Give up quality time

This one goes back to a statement I blogged a while ago. In short, the fact that I defined the time-slots for cycling that are important is a complete disservice to the process of learning. I packaged the cycling moments into training sessions that became mandatory moments of endurance and innuendo.

To change that pressure I asked her to spend times of the day with her bicycle. Just sitting on it, cleaning it or decorating it (girls love to do that). That way she could spend quantity time with her bicycle. This may have been the most important part of her learning process: the getting used to the shapes and other characteristics of her bicycle. That is: at her own pace.

Remember that iceberg of learning I often refer to? Quantity time is the lower part. It’s the other 90% that is needed for learning to occur. To translate this to ‘life on projects’: we need to make sure that people can spend time with the project and ‘decorate’ it like an eight-year old would decorate her bicycle.

So how well are we taking care of that tacit part of our projects? What do we offer people before and after they attend the training? How available are we for people from 5 to 9? Do we even allow people to decorate the project with their version of what it means to them? How about making their version of the communication into the master version?

The tragedy is that I have blogged about this stuff already three years ago, but I have not been able to translate it to a context where it matters. Knowing-doing-gap? As a bonus I’d like to share the conversation we just had at the breakfast table when I was boasting about the 1km I swam yesterday. To which she responded: “Why are you counting the distance that you swim? You’re not in school anymore.” That’s right sweetheart. Counting on you to unlearn me the bad habits of the business schools and get back to the stuff that matters.