Book Review: Do the Work

For the second time I have come across the reference of Steven Pressfield by following Seth Godin. The first time was by reading Linchpin, where Godin made a reference to Pressfield’s book The War of Art – a masterpiece that unveils the real face of resistance (particularly interesting for organizational change practitioners).

Do the Work is a very compelling ‘call to action’. More precisely, it is a ‘call to guts’. Whenever we are committing to something – be it the creation of a our next e-book, the founding of a company, becoming a parent or starting in a new profession – we are calling something into being that wasn’t there before. Steven Pressfield has been there many times and he gets personal when it comes to describing the beast of resistance that all of us encounter whenever we are creating something we want so hard with our heart.

He lists the enemies (resistance, rationality, friends and family) that hook us up into the status quo. Next he talks about our allies (stupidity, stubbornness, blind faith, passion, assistance and … friends and family) and how the same universe that is working against us can do nothing else than giving us tailwind once we have gathered enough gravity for our project.

The way to add gravity to your project is primitive, simple and stupid:

What I like most about this book is the language Pressfield uses to describe resistance and to make it really (I mean ‘really’) clear that is an inner battle. He gives us an extremely accurate map of our friends, our enemies, the structure of our work, the seven principles and the two tests of resistance.

Next is the pounding rhythm and adrenalin that he is able to push through your veins as a reader. I swear: even if you are a distracted reader like me – this piece will grab you by the guts and leave you no other choice than to finish it in one go. The only thing I was able to do in between was to send out some tweet signals stating I was on to something major:

“There’s no such thing as writing, only rewriting.”

“The inner critic? His ass is not permitted in the building.”

“Our job is not to control our idea. Our job is to figure out what our idea wants to be – and then bring it into being”

“When you suffuse your work-in-progress with passion, intention or hope, the universe responds. It has no choice.”

“Blessed is he who has found his work.” Vincent Van Gogh.

I started to read this book on Kindle because I was curiously attracted to it. As it happens I got really sucked into it and couldn’t put it back. This book resonated with a part in me that needed to be … well … ‘kindled’.

PS: Do the Work is a Domino project. It is available for FREE on Kindle. So there is no excuse – what-so-ever – for not reading it. 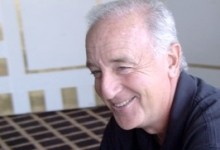