Power to the Pilot

In every project there is an extreme retrofit phenomenon that can only be seen when one participates in all stages of a project. I label it as ‘power of the pilot’.

In short, the power of the pilot is the reverse effect that the pilot launch of a prototype has on all previous phases of a project – including the initial analysis phase. But first you need to know how I look at projects.

I tend to look at projects as a lifecycle of different Non-sequential phases. That is correct: “NON-sequential”. In theory they are sequential. However, in real life none of the phases are completely over until the full project is finished. But each phase is dominant at a particular time.

As you can see in the drawing below, even when the project is officially in the design phase, some activities belonging to the previous and next phases, such as project setup and deployment, will be going on as well. Generally speaking, 80% of the work you are performing belongs to the official project phase you are in, and the remaining 20% of the activities belong either to the previous or the next phase. 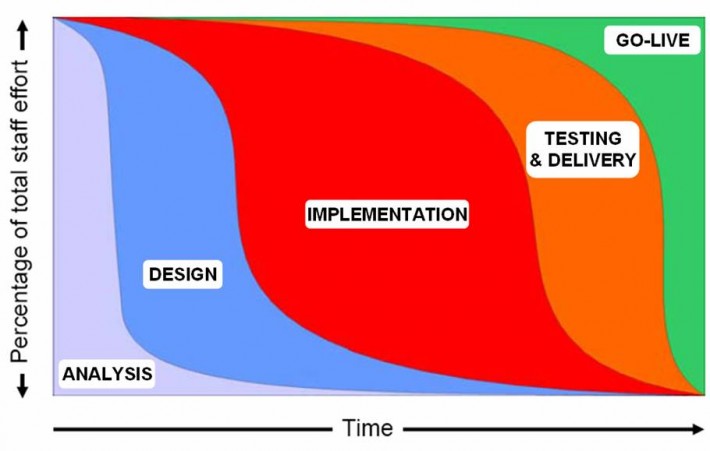 The Power of the Pilot

Here is what happens when the project team has struggled through the phases of analysis, design, implementation, and testing: they have reached the milestone of go-live. In most technical projects (i.e.: my world) this is done by means of a prototype that is launched for a small part of the target audience. Generally, this is called a ‘pilot-project’.

Through the eyes of technical people, this is it, and they hardly believe that there is anything that could go wrong, because all features have been tested and – in most cases – representatives of the target audience have been part of the testing teams. So nothing can go wrong, right?

It seems to be more complicated than that.

Over and over pilot projects prove to be battlefields for both, project members and for the target audience. Let’s have a closer look, each from their perspective:

What it Means to Project Members

From the project members’ perspective a pilot is seen as a final milestone. The technical architecture as it stands is at its best. Anything after this point in time will be considered as upgrades or additional feature requests. The only possible reasons to launch a pilot could be:

But all in all, project team members expect the solution to be final, and all the rest are details…

What it Means to the Target Audience

More often than not the pilot-project is seen as a threat. But a threat that people will tolerate because management sponsors are endorsing the initiative. There is no certainty at all this solution will be adopted. the only conditions for accepting a pilot project are:

Quite a difference in perspectives, don’t you think?

As it turns out in 100% of the cases, pilot projects result in a list of complaints, changes and additional requests. The next thing you know is that you are in the middle of a tense situation where people are alternating between “Who do you think you are?” and “Told you so!”

And then what? Here are some tips to make it alive through your Project-pilot days:

Anyway, that was just a thought.
Good luck with your pilot project!