Three is the Magic Number

“All good things come in threes” – that is my way of saying that I can not cope with more things at the same time. So I tend to reduce reality to a maximum of three dimensions.

As a matter of fact, there are three insights about organizational change management that are somewhat related because I can see three distinct phases in each of them. Have a look at the drawing below:

First, Elisabeth Kübler Ross, in her research on death and dying distilled the five stages of grief. Ever since its publication in 1973 it has been commonly regarded as the “cycle of change”.

Second, about 25 years earlier, Kurt Lewin published his thoughts on overcoming inertia and dismantling the existing mindsets in a model commonly referred to as the “unfreezing – changing – refreezing” model.

Third, Arthur Schopenhauer, who produced most of his writings even 100 years earlier than Lewin, made this remarkable statement about three stages of “truth”.

I find some “truth” in all of them, but most of all I find the combination inspiring:

1. As ‘unfreezing’ actions and initiatives are being set up you are likely to receive responses that ridicule your initiatives. Most people react from a position of denial and anger.

2. In ‘changing’ times opposition takes all kinds of faces and you should prepare for a drop in performance and self esteem. People hit the bottom of desperation once they realize that the world as they know it will never return.

3. Finally, once the transition stage is accomplished and people start to accept the aspects of their new reality, most of the things they ridiculed in he first stage are regarded as self-evident. That’s when you know refreezing actions can start, anchoring the new reality. 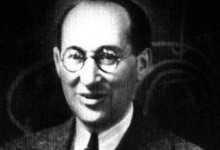