This 65 min video is worth watching till the end. You’ll see Marshall Goldsmith in action on an event called Leading@Google.

The bottom line of his talk and exercises is: you can’t change the past, so focus on the future and ask: what can I do to be a better manager / parent / son / daughter / co-worker …? It’s called feedFORWARD (future oriented) as a replacement for feedBACK (past oriented).

There are two previous articles on this blog on Marshal Goldsmith: 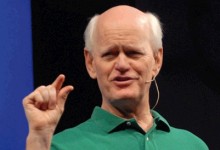