Some notes on a good interview that I read in the Atlantic. It’s an interview with David Thornburg, a futurist and educational consultant, about his new book ‘From the Campfire to the Holodeck: Creating Engaging and Powerful 21st Century Learning Environments’. Here is the link to the article: 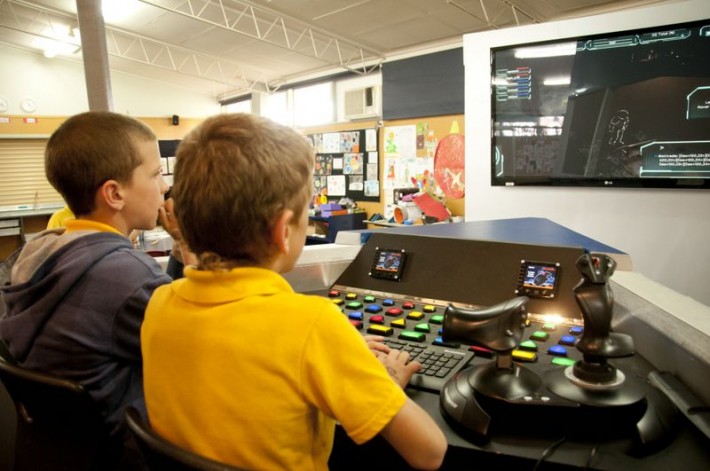 Since learning is a process I care about a lot, I have copied the following quotes for future reference:

Thornburg outlines four learning models: the traditional “campfire,” or lecture-based design; the “watering hole,” or social learning; the “cave,” a place to quietly reflect; and “life”—where ideas are tested.

(On the holodeck) “When the students enter the room, it’s already up and going. It’s only after they’re out of the room that I turn everything off and it goes back to the regular room. And I feel a difference. It’s like, “Whoa, where’d my spaceship go?” I get a funny feeling in my stomach.”

“There’s a painting of a classroom by Laurentius de Voltolina from 1350 that shows it’s not working. Students are talking to each other or falling asleep while the teacher drones on. Why has this perpetuated? I don’t know. In our workshops we tell people to go to Second Life and check out a classroom—and they’re exactly like they are in the real world. It’s strange, because this is a place you can move by teleporting, you can do whatever you want. So using space in the same way is strange.”

It’s all about engagement. I’ve heard things like a child’s attention span, in minutes, is equal to their age in years. That’s so not true. If children are engaged in something, they’ll spend hours on it.

(!!!) many teachers use technology to do the same old things better, rather than using it to do things differently. (!!!)

So the power of the new tool is to use it to do things we couldn’t do before at all.

We’re all proud of our content expertise. I’m proud of my content expertise, and yes, I love sharing it. But there are times to do that and times not to do that. If your goal is to have kids think and solve problems, you need to know when to give information and when to stop giving information. And that’s an art.

(On cell phones in the classroom) ‘The resistance comes because of two things. One is the feeling teachers have that they’ll lose power, that they’re competing with the device. The second part is the worry that students will use the tools to cheat. The answer to the second one is a bit easier. Just don’t ask questions for which Google is the answer. It turns out that crafting Google-proof questions is tricky, but it can be done. And also, what’s wrong with kids going online and looking stuff up? If they’re that engaged in the lecture that they want to know more about it, why not have the tools to do it?’

Bonus, while googling David Thornburg’s name I cam across this video that sums up the major points of his innovative thinking: