The Clash of Authority and Influence

Jumping to conclusions about the relationship between authority, influence and why your boss is so grumpy – especially about social media.

Why Your Boss is Grumpy

In a new study, researchers at USC, Stanford Graduate School of Business, and the Kellogg School of Management have found that individuals in roles that possess power but lack status have a tendency to engage in activities that demean others. According to the study, “The Destructive Nature of Power Without Status,” the combination of some authority and little perceived status can be a toxic combination.

Have a look at the correlation that was found between hierarchical power and status (image copied directly from the article): 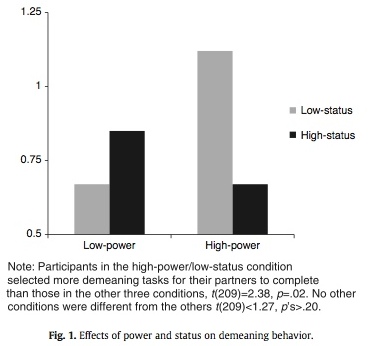 The researchers predicted that when people have a role that gives them power but lacks status then it can lead to demeaning behaviors. In their own words:

“Put simply, it feels bad to be in a low-status position and the power that goes with that role gives them a way to take action on those negative feelings.”

Apparently this is one of the first studies that focuses on the relationship between power and status – two elements that have typically been looked at in isolation. To quote the researchers:

“The idea that power always corrupts may not be entirely true. Just because someone has power or, alternatively, is in a low status role does not mean they will mistreat others. Rather, power and status interact to produce effects that cannot be fully explained by studying only one or the other basis of hierarchy.”

To summarize, this may just be why you boss is so grumpy all day: feeling unimportant and unrespected in a powerful position. A hug may help – who knows?

Be Afraid. Be Very Afraid.

So now you know why your poor boss is so grumpy – high in authority, but low in influence – it’s time to make that grin disappear from your face. The bad news is that things will only get worse with the rise of social media. My prediction is that the gap between influencers (high in status) who are low in rank (low in power) on the one hand, and command-and-control bosses (low in status and high in power) will get bigger. Have a look at the image below: You may still think that social media are only changing the marketing and sales part of our organizations, but it goes deeper than that. People have acquired a new form of literacy called online collaboration and the relationships and bonding that happens in so-called communities is tribal (based on co-creation), rather than hierarchical (based on compliance). This is what is currently being played out in an organizational context and it defines the tension between the so-called gen X, gen Y and the gen ‘what-have-you’s.

Reading through these studies and jumping to premature conclusions as I did in the drawing above is an excellent way for me to connect some dots. If – as a reader – you have gotten this far, you may want to check out the three following links. The point is that middle management will be the first who will suffer from this clash. Of all functions in an organization theirs is the most structured, defined and driven by command-and-control.