Commander’s Intent: getting to the core

“Communication is not the message sent, but the message received.” You knew that. Because like me, you are smart. Like me, you may have used it to outsmart other people when it comes to criticizing their message. But can you make a better message?

Ehhhmmmm… while the statement “It’s not what you say – it’s what they hear, stupid!” is a direct way to demonstrate the flaws of a communication, coming up with a better alternative requires different ammunition. And that’s exactly the word to cover this article. Did you know that military operations and military field manuals can help us a great deal in achieving better communication?

In their 2007 bestseller Made To Stick the Heath brothers (Chip and Dan) are setting a new standard for SUCCESful communication. The SUCCESs acronym is a communication stickiness checklist and stands for: Simple, Unexpected, Concrete, Credible, Emotion, Story. For the first part of the checklist – Simple – they draw heavily on the US Army Combat Maneuver Training Center in order to get to the core of the idea.

Like no other, the US Army knows that the distance between the intent and the operation should be kept as short and as straight as possible. Else they risk inadequate mission accomplishment. The way they do it is through Commander’s Intent.

The commander’s intent describes the desired end state. It is a concise expression of the purpose of the operation and must be understood two echelons below the issuing commander. . . It is the single unifying focus for all subordinate elements. It is not a summary of the concept of the operation. Its purpose is to focus subordinates on the desired end state. Its utility is to focus subordinates on what has to be accomplished in order to achieve success, even when the plan and concept of operations no longer apply, and to discipline their efforts toward that end.

What’s in it for you: Focus

I never thought that Uncle Sam would be of any help for explaining things to my grandmother – which is my ultimate bottom line. Commander’s Intent helps you to achieve focus, because when all plans fail you better not freeze and grind to a halt. In case you’re not convinced, consider the quote of Mike Tyson below: 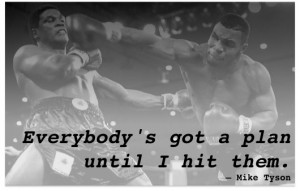 CI is the military version of “Keep It Simple, Stupid.” Urging their leaders not to make the battlefield planning too complicated because in the heat of battle, innumerable variables will dictate the proper course of action.

The US Army teaches their leaders in all echelons the following technique:

=> By answering these questions, you have basically written your intent.

=> Remember, your intent statement provides a framework for the operation. It does not tell your soldiers what to do. It does give them the overall picture of what you say the company needs to accomplish to be successful.

=> By making your intent a clear, concise, and focused statement, you greatly increase the chances that your soldiers will continue the mission, even when the operation doesn’t go as planned.

Here is a great video by Dan Heath explaining why the US Army had better invaded our business schools and most of the corporate off-site strategy workshops. In this video he explains how to write a mission statement that doesn’t suck. The moral of his story for corporate mission statements:

Southwest Airlines is a company that discovered the secret behind a Commander’s Intent to get to the core of their success, as their CEO Herb Kelleher asserts:

“I can teach you the secret to running this airline in thirty seconds. This is it: We are THE low cost airline. Once you understand that fact, you can make any decision about this company’s future as well as I can.”

In short: next time I outwit my colleagues by telling them: ‘If you can’t explain it to your grandmother, forget it’ – I can rely on Uncle Sam to complete the action.